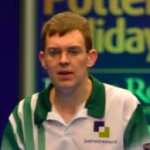 Mark comes from a bowls hybrid background in that he is also a rated Crown Green player in the Blackpool Area but is definately no slouch on the rinks in the Indoor Arena.

Mark deservedly won a ‘Tourcard’ entry into the 2014-15 season of WBT events and went on to to gain a quarter final place in both the Scottish and International Opens which earned him enough points to topple out newcomer, Wayne Hogg to 17th place and gained Mark the 16th placing in last seasons WBT Ranking List. Going into the 2016-17 season Mark had gained a further quarter final appearance which kept him in the WBT Rankings for the 2017-18 season and riding to No. 12.

Winning the 2018 World Indoor Singles Title propelled Mark to number 9 for the coming 2018-19 season and he has earned a deserved respect from the players on the Tour as ‘one to watch’.

‘dawes’ are shut for Burnett’s road to the final

First match of the afternoon was the much awaited ‘Just’ 2018 World Indoor Pairs Final. It was a packed International ...
Read More dawes in autocruise to the second round in the open singles

The final match of the day here in the International Arena at Potters Resort in the ‘Just’ 2018 World Indoor ...
Read More

Chestney into the pairs final with Dawes

The first match here in the afternoon at Potters Resort in the International Arena was semi final 1 of the ...
Read More 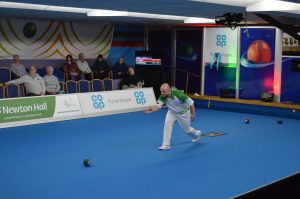 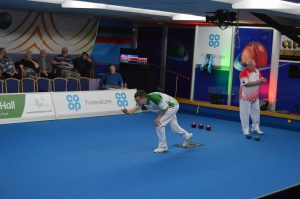 Blackpool’s Dawes opens the way to the quarter finals

Final match of the afternoon here at Newton Hall Holiday park in the International Open was between local hero, Mark ...
Read More