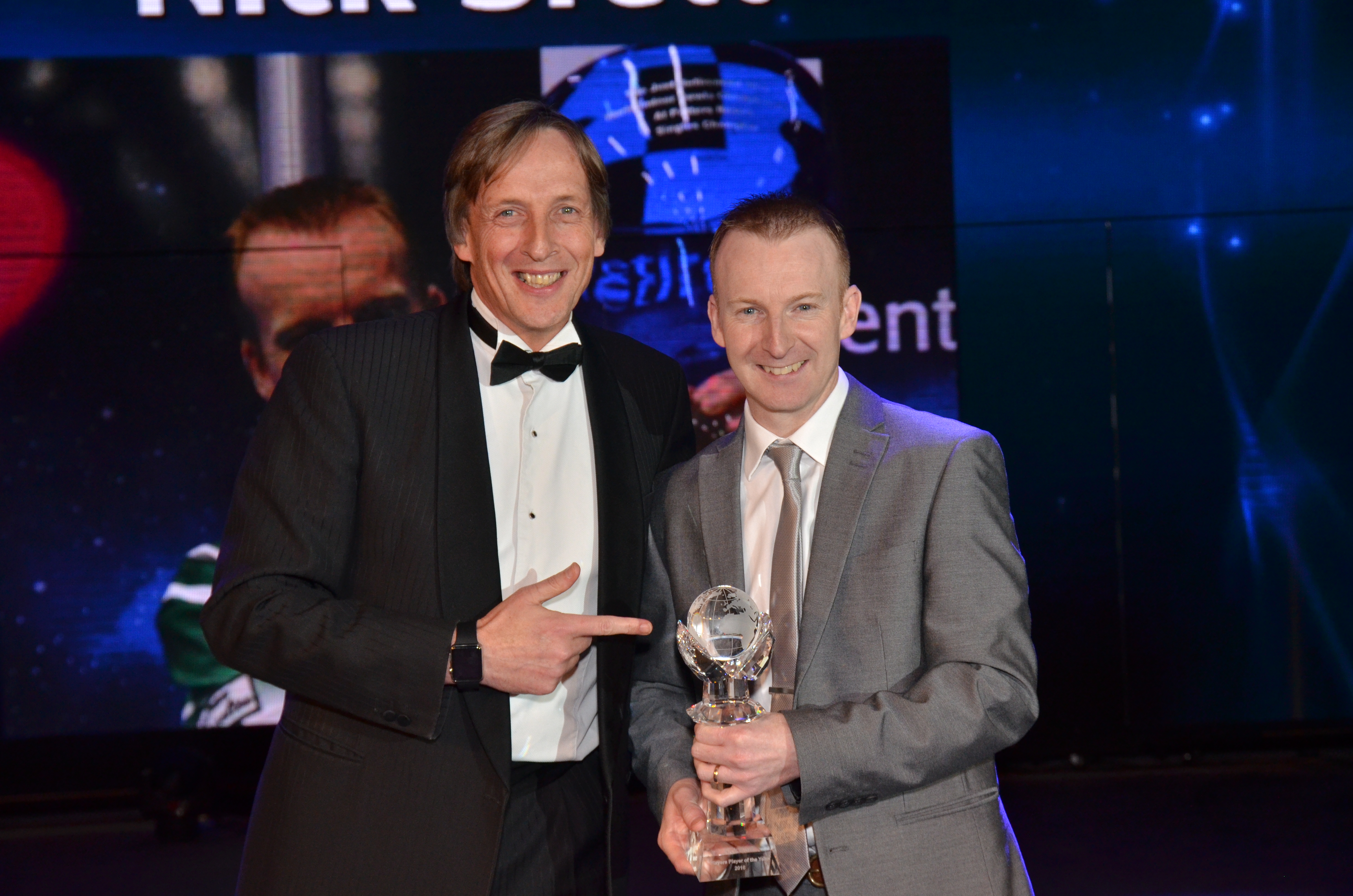 The  first  award “Players Player of the Year” voted by the players as to who was the best in 2015-16 season and ask John Potter, MD of Potters Resort to present the award.. The 3 nominees were Greg Harlow, David Gourlay & Nick Brett and it was Nick Brett as winner The  “Young Player of the Year” voted by the panel as to the best player in 2015-16 season under the age of 25 and ask Richard Maddieson, CEO for the World Bowls Tour to present the award. The 3 nominees were Joseph Mower, Connor Cinato & Ross Owen and the winner was decided by the panel to be Joseph Mower. 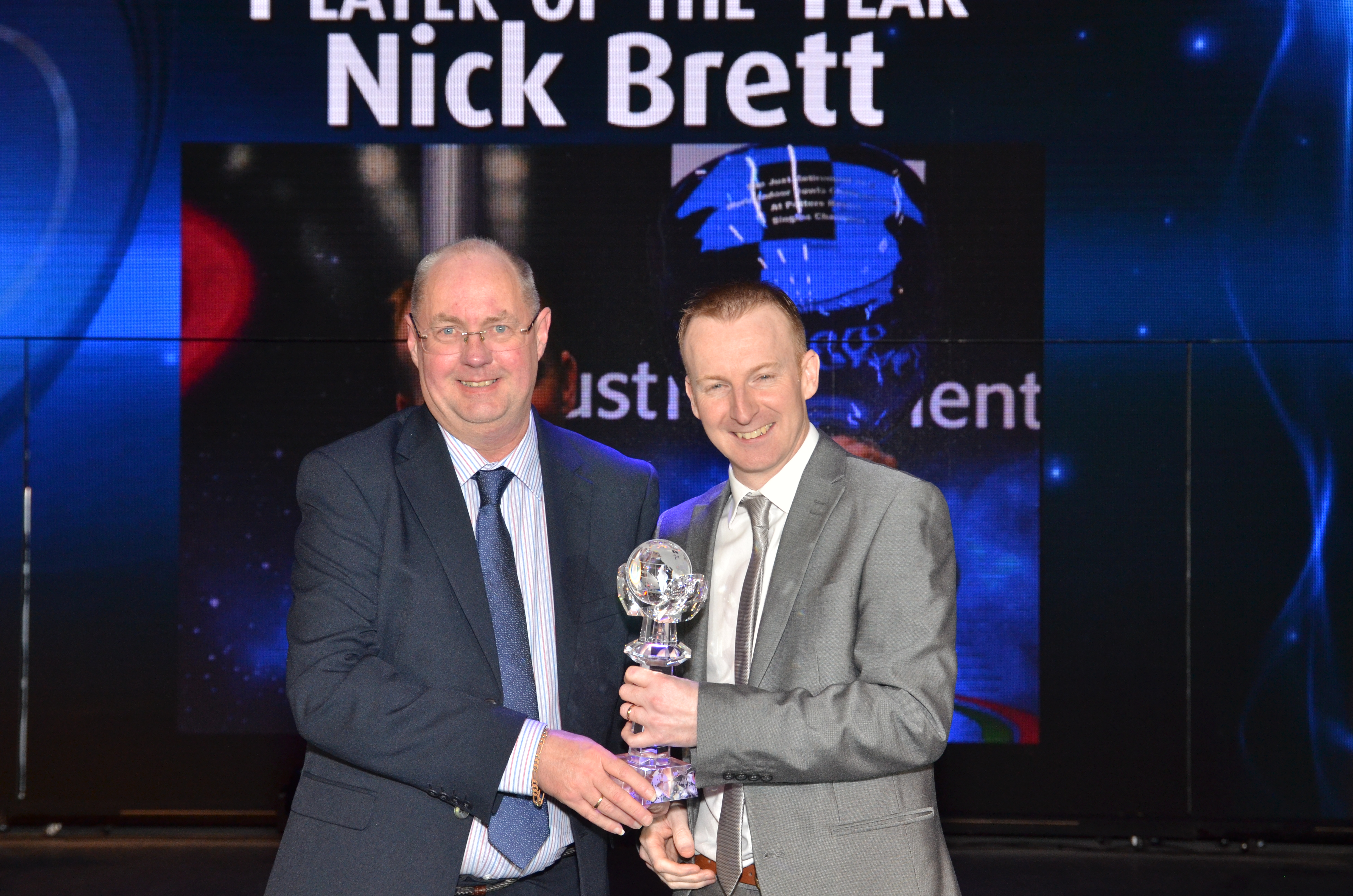 The  “Player of the Year” voted by the panel and awarded to the the player the panel felt that had played most consistently and outstandingly in the 2015-16 season and the nominees were  Nick Brett, David Gourlay & Greg Harlow. Martin Gale, WBT Director presents the award to a delighted Nick Brett.

The fourth award “Best European Qualifying Performance of the Year” voted by the panel as to which player had performed best overall in the European PBA qualifiers across the 2015-16 season and  the 3 nominees were Janice Gower, Trevor Taylor & Julie Forrest and was won by Trevor Taylor  who unfortunately could not attend the Awards Evening.

The fifth award “Best Overseas  Qualifying Performance of the Year” voted by the panel as to which PBA Qualifier player from the overseas branches had performed best overall across the 2015-16 season and the 3 nominees were Steve Halmai (Australia) , Murray Glassey (New Zealand) & Neil Furman( USA) and it was  Murray Glassey  as winner. Murray could not attend the event and will collect his Award at the International Open in March this year (2017) The sixth award “Performance of the Year” voted by the panel to have been the best player performance in the 2015-16  season and ask Mark Jones, Commercial Director for Potters Resort to present the award.. The 3 nominees were David Gourlay, Nick Brett & Greg Harlow and it was  David Gourlay as winner. The seventh  award “Match of the Year” voted by the panel and awarded to the two players the panel felt that had played the most exciting match for television and audience in the 2015-16 season and the nominations were:
Stewart Anderson & Nick Brett for the 2nd round of the Scottish International Open 2015

Lesley Van Dyk, Community Engagement Partner for the Co-op Funeralcare presented the awards for the incredible match in the Scottish International Open 2015 where the bowls were of an sensational standard and it was anyone’s match and it was  Stewart Anderson & Nick Brett  who received their individual awards.

The eighth  award “Services to Bowls” was awarded to  The Dewars Centre & Perth Indoor Bowls Club, Scotland for all their support over the last 11 years for the WBT Scottish International Open event where they have freely generously given over the venue and all staff totally free of charge. All their staff have supported the event with it’s long hours and WBT wanted to show them that the sport recognizes all their efforts. Due to weather no-one could get down from Dewars to receive the award on the night. The ninth and final  award which takes a player into the WBT and Potters Resort “Hall of Fame” voted by the panel to a person who has played  in the sport at any level and has made an outstanding contribution to bowls  and it was awarded to Darren Burnett by the CEO of WBT, Richard Maddieson who addressed the audience with the following,

“This player came through the ranks of the PBA Qualifiers at Carlisle, broke into the WBT Top 16 and has been there since winning his first WBT Title – The Scottish Masters – back in 2001. Has has gone on to win the World Championships Singles, Pairs and Mixed Pairs and also the Welsh International Open.

On his National front he has won every Scottish National title there is, many of them more than once. He has won Titles at the WIBC Championships and the British Isles Championships and also he is a Commonwealth Games Gold Medallist from Scotland only a few years ago. He is a man that fervently loves his chosen sport of Bowls and is passionate about where and how it should go and I believe he is a great ambassador for our sport and should be recognised as such.