Paxton pips marshall for the finals 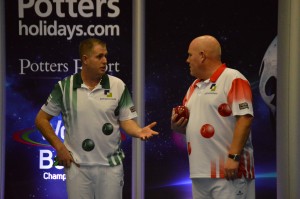 and defending Champion Alex Marshall MBE faced Robert Paxton World No4. Both players have played well all tournament but today one would move into the World Final. First end to Paxton. Second end and Marshall was on fire, Paxton only one bowl in the head, Marshall picks it out clean and scores a four. End three and again Marshall comes up with a superb delivery to count another shot and take a 5.1 lead. Marshall continues to pile on the pressure in end four, holding two shots, Paxton then draws the jack through to his own bowl to get shot. Score 5.2. End five and again Marshall gets to the jack first and piles on the pressure even more with a large count. Score 9.2. End six and even more pressure from Marshall, another three and the set is nearly gone. 12.2 to Marshall. End seven and Paxton strikes with his last bowl to get a shot out of it but its Marshall takes the first set after just 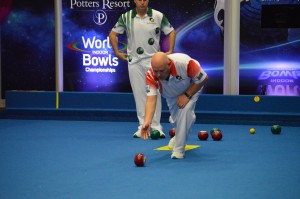 Second set and after two ends Paxton found his weight, changed the length slightly and started to put in some good leads. Score 0.2. Marshall picks up a one at the next end but Paxton rallies again at end four and holds three shots till Marshall’s fourth delivery which gets the jack for shot, Paxton then draws shot with his last bowl 3.1 Paxton. Marshall nabbed a two at end five to tie the scores back up at 3.3. Marshall picks up another shot at the fifth end to go into the lead again. End seven and with Paxton’s second bowl he plays a great conversion to hold two shots, draws for three with his third, Marshall draws in for second and Paxton draws with his fourth for a count of two. After seven ends second set the score is 4.5 Paxton. Then in a weird turn of fate at end eight Marshall holds shot only to see one of Paxton’s early in the end deliveries sit down and in for shot. So going into the final end of the second set Paxton holds a 6.4 lead. Could we be on for the second tie break of the day? Final end, Marshall holds shot, Paxton draws in for shot, Marshall with last bowl has to make a two or we go into the tie break, he misses, Paxton takes the second set 7.4 and we go into a tie break in the second semi final. 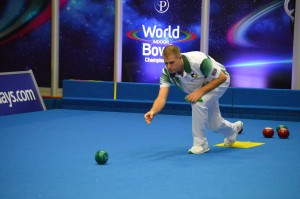 First end and the shot holder goes back and fourth, Marshall plays a runner to take out Paxton’s bowl and runs the jack back, Paxton overplays, Marshall puts another in and Paxton plays short. First end Marshall. Second end tie break and very nervous bowls from both players up to Marshall third delivery where he draws shot leaving Paxton with one bowl left, he draws shot to a delighted crowd who don’t want this game to end, last bowl of the end from Marshall and he overplays which takes us into a final end of a tie break. Short jack length from Marshall and Paxton draws shot with his second, Marshall is short with his third, Paxton draws in again, so defending Champion Marshall has one bowl left, game is against him, pressure on, Marshall misses and Paxton takes the tie break 2.1.