Paxton first through to the semi finals

Quarter final one and 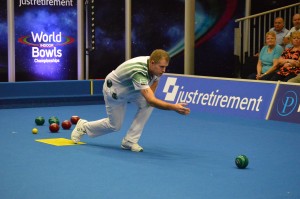 world No4 Robert Paxton faced qualifier Jamie Chestney. Chestney had been on fire for the first two rounds t the finals, could Paxton stop him in his stride? After eight ends Paxton had managed to pull into a 6.3 lead in what was a very close encounter. Final end and Paxton managed to pick up a shot to take the first set 7.3.
Second set and Chestney rallied and put Paxton under all sorts of pressure. A superb end from Paxton at end five, picking up a count of four kept him in the game. Chestney leading by two shots in the set playing the last end, only to see Paxton holding two shots for the tie and the chance of a tie break disappearing.  Chestney misses with his last and Paxton takes the last end and ties the set 7.7 to take the match and the first semi final place.