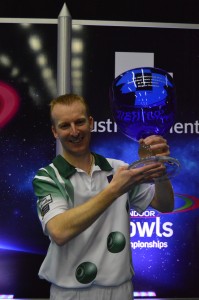 k Brett finished off his CV of World Bowls Tour titles in fine fashion at the Just retirement World Championships 2016 at Potters resort.
His opponent in the final Robert Paxton World No4. Both had come through epic Semi Final games and that seemed to have taken its toll on both players early in the game and the opening set proved to be a nip and tuck affair drifting backwards and forwards. Brett picking up a count of three at end six but Paxton countering with two counts of two at ends seven and eight. Paxton held the lead after eight ends and going into the final end had a two shot gap. Brett played a superb end, held two shots, Paxton drove to try and remove Brett’s bowls but only managed to get one away, Brett with his final bowls drew shot and with a fist punch to the sky managed to draw the set at 9.9.
The second set Brett got off to a flyer with a four shot count. Then added a three at end three and a two at end four. This gave Brett the boost he needed. Paxton put up a fight and end for end put Brett under pressure. But it was a bridge to far for Paxton and it was Brett who played some superb bowls and lifted the 2016 World title to add to his many other achievement’s and awards to a delighted packed Potters crowd. Final score Robert Paxton 9.9 9.12 Nick Brett
AUTHOR: Richard Maddieson
CATEGORY: Just Retirement Professional World Indoor Championships 2016 , News
TAGS: Nick Brett