Marshall & Forrest through in the mixed

First match of the afternoon 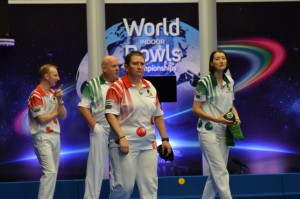 was Semi Final 1 in the World Indoor Mixed Pairs Championship between Nick Brett & Alison Merrien MBE against 6 time World Indoor Champion and Julie Forrest. Into the first set and it was Forrest and Marshall that laid down an opening barrage that Merrien and Brett found unstoppable, despite some really terrific shots by Brett. It was Forrest and Marshall that took the first set 3-9.

Into the second set and Brett and Merrien regrouped and withheld another onslaught and managed to hold it to a 4 all draw by the 5th end. Marshall then played at top form and despite a massive attempt by Brett who was playing superb bowls any three shots collected by the start of the 8th end to give Forrest & Marshall a 6-7 lead. It was Brett that manged to sneak just inside Marshall on the 8th end with a single to get the score to 5-7 to Forrest & Marshall, and into the final end of the set left Brett and Merrien looking for a 3 count to get the set and force a tie break – holding two shots with only last bowl to go from Brett, Brett attempted the perfect draw to just tickle the jack and get the three they need, the weight was inch perfect but his bowl just caught the jack on the wrong side and it nudged it awy from the two he already held so when the dust had settled it remained a two to Brett and Merrien and not the three they needed so Forrest and Marshall go through to the Final on Tuesday the 19th.