Harlow through first round

Last match of the day here at Potters Resort in the Just Retirement World Professional Indoor Championships was between England’s Greg Harlow and Scotland’s Ronnie Duncan. It was a confident Harlow that stepped out onto the portable rink fresh from his winning the Scottish International Open in November 2015 at the Dewars Centre in Perth. In the first match he unleashed an onslaught against Duncan that gave Duncan all sorts of trouble trying to wrest shot away from Harlow. When Duncan did manage to wrest shot away from Harlow he simply conjured up bowls and took it straight away from Duncan. The first set ended up with a scoreline of 9-4 to Harlow but the score belies the match. 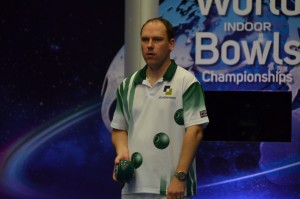 Into the second set it became obvious that Duncan was unsettled and could not find some of his lines that he had played and for the first five ends it all went Harlow’s way. Into end 6 Duncan managed to fend off Harlow to pick up a two to take the score 5-3 to Harlow, but Harlow retook the double in the next end. Duncan then managed to grab another double in end 8 to make the score 7-5 leaving Duncan needing a 3 to force a tie break – with one bowl each left to play Duncan held a two and played a draw bowl and then held the three he needed, Harlow played a drive shot at the head and as it came down the rink it started to swing away and it looked for a few seconds as if it would go by the bowls it needed to connect with – however – it held just enough to hit a side bowl and force one of Duncans bowls just outside the count and left Duncan holding a two so it was set and match to Harlow 9-4, 7-7