Gourlay enters the cast for the semi finals 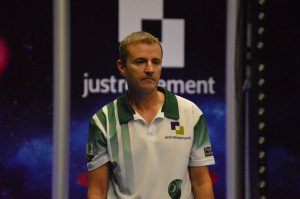 l of the day and World No 6 David Gourlay faced English qualifier Mathew Orrey. The opening three ends went to Gourlay with one shot an end. Then a loose opener at the fourth end let Orrey into the game and he was holding two shots till a Gourlay runner hit target but Orrey managed to draw with his last to get on the card. The next end was superb from Gourlay picking up four shots and taking a 7-1 lead after five ends. Into the seventh end Gourlay held shot up to Orrey’s last runner where he got the perfect connection to take two shots and claw some of Gourlay’s lead back. But it was all over at the next end from a timed runner from Gourlay to pick up a shot and the first set 9-3. 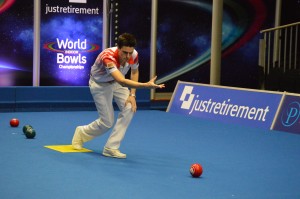 Set two and Gourlay always looked comfortable and whilst Orrey played solid bowls at every end after the first five ends Gourlay held a 4 -1 score line. End six Orrey grabbed a shot away from Gourlay. After end seven Orrey was still battling at 3 -4  but Gourlay piled on yet more pressure. Gourlay took the match finally 9 -3 5 -4 and fills the final place in the semi finals where he will face World No1 Nick Brett.