In the afternoon at Potters Resort and the Just Retirement World Professional Indoor Championships it was the Final of the English Pairs that took to the portable rink for the first match of the day where we saw Edward and Robert Elmore take on the duo of Louis Rideout and Sam Tolchard. Despite a valiant effort from the brothers Elmore it was Rideout and Tolchards day as they took both sets in a clean 6-3, 6-8 victory and they go through to face Darren Burnett & Stewart Anderson on Saturday morning.

Next up were Neil 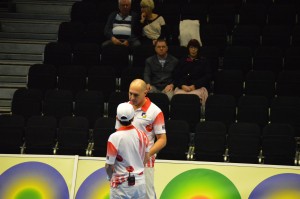 Furman and Mary Ann Beath from the USA against David Corkill and Chris Eadie for Ireland. The first set was a very tight affair and both USA players were consistently putting the pressure on Corkill and Eadie and forcing them to play some excellent save shots, but it was the Irish pair that eventually managed the first set. Into the second set and it was the Irish pair who were a little more consistent and took the second set and match with a scoreline of 5-7, 4-9 to Corkill & Eadie who play again in the evening against Jonathan Ross and Les Gillett.

First match of the evening was David Gourlay and Mervyn King against the Scots pairing of Ronnie Duncan and Colin Walker. The first few ends saw a good tussle between the pairs with the score at 4 all on the sixth end. Gourlay and King took a another double on the 7th end to go 2 up but then the wheels came adrift and they dropped a 4 on the 8th to go 2 down into the final end of the first set and Duncan & Walker stole a single on the 9th to take the first set.

Into the second set and it was the Scottish duo that stormed away to take 9-0 lead by the 4th end. Gourlay & King managed a double on the 5th end. Scotland took another swift double on the 6th to go 11-2 up and it was a battle that Gourlay and King could not win and the set went to Duncan and Walker who took the match in two sets. 6-9, 4-12. They face Robert Paxton and Simon Skelton, the defending Champions on Saturday afternoon.

The final match of the day saw the Irish Pair of Corkill and Eadie back on the portable against Jonathan Ross and Les Gillett. T he first set seemed to be a battle of wills with neither pair giving an inch and the first set went to to a finish as a 9 all draw.

Into the second set and it was Ross and Gillett that started of well going into an 8-3 lead on the 6th end, however then the run came to an abrupt halt as Corkill and Eadie ratched up their game and took a single in the 7th, a double in the 8th and lied game with 3 shots with Gillett having one bowl left to play. Gillett played his last bowl but just went a tad too high and it drifted past the head and it was Corkill and Eadie who took the match 9-9, 8-9 and now play Alex Marshall MBE and Paul Foster MBE as last match of Saturday 8th afternoon.

All matches are live on www.youtube.com/worldbowlstour.com