This was a match to be s 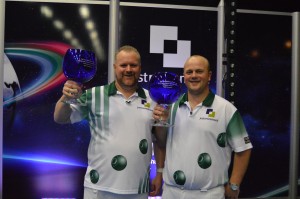 een, if you did not catch it on BBC then look at it on the WBT youtube channel on www.youtube.tv/worldbowlstour. All four players were playing to a massive standard in front of a packed out audience at Potters Resort and what a match it turned out to be. Ronnie Duncan and Colin Walker paired up against Darren Burnett and Stewart Anderson. With Duncan leading against Anderson the battle of the leads was one thing and then we had the skips Walker and Burnett playing superb shots. In the first set so fine was it that by the 6th end it was only 5 all and it was Burnett who played some incredible last bowl shots to turn negative heads to positive with immense accuracy that lead the Burnett & Anderson pair to a 7-10 set.

Into the second set it was again the driving of Burnett converting heads with his last bowl that took them to a 2-8 lead in the 6th end and it seemed as if nothing that Duncan & Walker put together could outfox Burnett. End 7 looked as if the game may change as Duncan & Walker took a single and they went into end 8 where they lay 4 shots and Burnetts last bowl to come - Burnett played a controlled weight shot, halved the front bowl onto the shot bowl, nicked the jack out sideways and picked up 2 shots. Duncan & Walker gritted their teeth in desperation and swiped a double the next end to make the score 5-10 in the 9th end. Into the tenth end and down in the head Walker played a runner perfectly but again, luck was not with them as the jack flew into the ditch - but just on the wrong side and the respot took them to 1 shot down so it was Burnett & Anderson that took the World Indoor P airs title for the first time together.