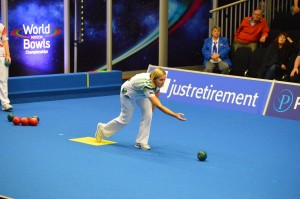 mi Finals was between defending Champion Laura Thomas from Wales and England’s Ellen Falkner and proved to be another tight score match between the two Ladies. Into set one and it was Falkner that got off to a good start taking two singles, to Thomas’s one single but then Falkner picked up a double to take the score to 1-4 in the 4th end. By the 6th end both ladies had grabbed another single each and then Thomas picked up a double. The match went into end 8 with the score at 5 all and it was Falkner who managed to hold on to a single in the 9th end to take the first set 5-6. The second set was again a tight affair with neither player breaking away until the 5th end when Thomas grabbed a triple away from Falkner to make the score 5-2 to Thomas. Falkner came right back at her and took a double and a single in the next two ends to again level the score at 5 all. A couple of loose shots from Falkner then allowed Thomas to regain the edge as she took a triple and a single in the last two ends to grab the second set and force a tie break 9-5. Into the tie break neither player gave way and each one grabbed and end each and down to the wire we went with the Defending Champion, Thomas, fighting hard to keep Falkner off the jack, but it was not to be as Falkner grabbed the last end and match to go into tomorrows final. 5-6, 9-5, 1-2