Duncan & Walker go to the party

The first of the afternoo

ns World Indoor Pairs Semi Finals here at Potters Resort was an exciting affair between two top pairs of Scottish bowlers, Ronnie Duncan & Colin Walker against Paul Foster MBR & Alex Marshall MBE. In the first set it was the deadly action from Foster & Marshall that put them in the winning position as they continually denied Duncan & Walker places in the heads and despite some incredibly good and solid bowling from Duncan & Walker it was Marshall & Foster that took the set 3-9.

Duncan & Walker rallied however in the second set and produced some superb bowls and precision, together with tactical thinking as the manoeuvred their way through the set and quite literally drove their opponents to the edge. It was Walker and Duncan that cleaned up with a set score of 9-4 and forced a tie break. 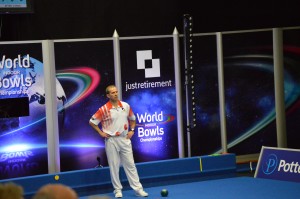 Again we saw incredible bowls from both pairs and the audience was rapt with attention on virtually every bowl – it was one end apiece and last deciding end. Duncan drew shot bowl with exact precision, lodge the bowl and missed both tries by a hairs whisker – Walker placed strategic bowls and it was Marshall that had to move the bowl – first attempt missed by a fraction, with his last bowl Marshall elected to kill the end – he connected with the target but just slightly off where he needed to hit it to clear the head and left the original first bowl sat with the jqack and Foster and Marshall departed the 2016 Pairs ending their 5 year run in the World Pairs Final. Duncan and Walker go through to the final with a scoreline of 3-9, 9-4, 2-1