First match of the afternoon here a 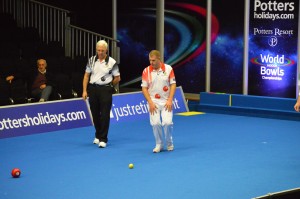 t Potters Resort in the Just Retirement World Professional Indoor Pairs saw defending Champions Robert Paxton and Simon Skelton facing the Scottish duo of Colin Walker and Ronnie Duncan and it was a tense first set Walker & Duncan going 5 ahead in first three ends. The defending champions managed a double in the next end with Duncan & Walker responding with a single to go 6-2 up at the start of the 6th end. Paxton & Skelton then took the next three ends in rapid succession to go 7-6 ahead with one end left to play. The Scottish duo then lived up to their Scottish reputation and took a full four to take the set 10-7. y swiftly dispatched the Scottish duo 9 – 4 for the set and grab a tie break. The situation was then reversed and it was Duncan & Walker who took the first end with ease, in the 2nd end Paxton & Skelton faced match lie as Paxton went to his first bowl and managed to snick the jack out into the open right beside the side ditch, Walker with his first bowl then drew a side bowl to the jack and Paxton had his last bowl to play to stay in contention. He played a draw shot but it just rolled ditch side out of play and Duncan and Walker go through to the Pairs Semi Final on Monday 11th. Score 7-10, 9-4