Brett overpowers Elmore and is history in the making? 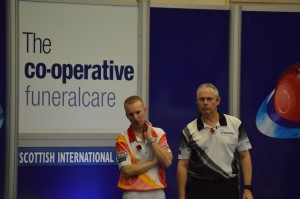 pen at the Dewars Centre in Perth? Could he again defend his title and win three years on the trot? Well, World No 1 and defending champion, Nick Brett made a great start to his title defence here in the afternoons second game by taking out his ex team mate from the City of Ely Club Robert Elmore. The first set was a one sided affair with the W 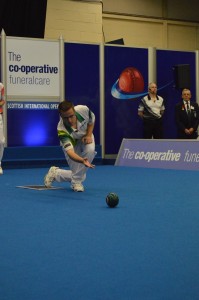 orld No 1 taking the honours 12.3. The second set, however Elmore started to settle in this, his first time, under TV cameras. Although Nick got off to a 5.1 start, Elmore dragged it level at 5.5 at seven ends. But it was a count of two from Brett on end eight that left Elmore looking for three shots in the final end. He only managed to pick a count of one up and Brett took the tie 12.3 7.6.

Coverage continues Live and in full HD throughout the tournament here at Perth on Sport Scotland BBC2 and also every match in full live on www.youtube.com/worldbowlstour.