Brett into last 16 in the world singles orld No 1 took on Qualifier James Rippey in the last match of the first round to be played off and it was a very nervous Rippey that stepped out for his first ever appearance on the blue portable rink. Unfortunately for Rippey he came up against a very on form Brett and despite everything that Rippey did, it was Brett that just nipped the post on most occasions. In set one it was Brett that was doing all the damage despite Rippey getting very close to the jack and Brett whipped the set away from Rippey 12-3. Into the second set and despite Rippey having settled and playing some fair bowls it was Brett that again 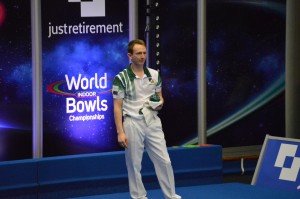