anderson wins the champions battle of the quarters 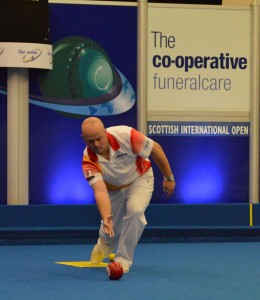 he battle of the ex World Champions. Stewart Anderson 2013 World Champ playing three times World Champion Andy Thomson. Ayrshire’s own Anderson dominated the first set and although Thomson hung in it was Anderson who clinched set one 9.4.

Anderson picked up a two in the opening end of the second set. At the next end Thomson was holding two shots, Anderson splits the head open to change the end lie into three shots for himself but left Thomson four feet to draw for shot, Thomson fails and Anderson takes a 5.0 lead after two ends in the second set.

A count of one at the next end then following that up with a three and Anderson had the semi final clear in his sights leading 9.0. Slight foot off the gas from Anderson allowed Thomson to pick up a count of three at the fifth end and a glimmer of hope. Normal service resumed for Anderson at the sixth end and although Thomson tried every shot in his repertoire, Anderson picked up a count of three. The final end was the seventh end and Anderson picked up a shot to win the set 13.3.