Here at the Co-opera tive Funeralcare Scottish International Open with the best match of the event so far it was excitement all round. Set one was a tight affair both players playing to the top of their game. After three ends the scores peeled at 3.3. High scoring and high quality bowls but after seven ends Anderson held a 10.6 lead. End eight Brett held two shots and Anderson played a runner and took one out, with his last bowl Brett drew in for a count of two and the score was 10.8 to Anderson playing the last end. Brett held shot till Anderson’s third bowl and the Scottish man drew in within inches of the jack. Brett runs at the head and bowls and jack fly, when the dust settles he held the two he needed to tie the set, with the jack on a re spot, but left too much room for Ayreshire’s own 2013 World Champion Anderson and he took the first set 11.6. “The first two bowls were the key in that set and I was 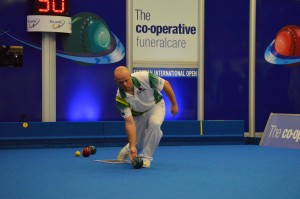 confident with the way I was playing that I could put Nick under pressure, “ said Anderson.

Anderson piled more pressure on the defending champion Brett at end one of the second set and to the delight of the crowd started the score card off with a three shot count. Brett rallies and picked up a one at the next end just failing to add to the count with his last bowl. The next end Brett counts a two so we are all square again at 3.3. Brett is on a roll and we had a 7.4 score line in the second set moving into end seven. Could we be on for another tie break? Anderson picks a shot back up and holds at end eight till Brett’s third delivery when he draws in for shot. Anderson plays a runner and takes Brett’s bowl away from the jack to hold shot himself only to see Brett himself play a runner and remove Andersons bowl. Brett now leads 8.5 moving into end nine of the second set. After the dust settles at the final end Brett holds shot and takes the second set 9.5.